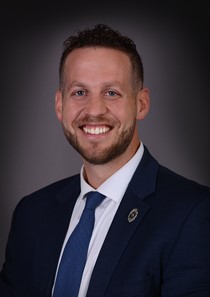 Mike Kagay took office as the District Attorney on January 9th, 2017. Prior to being elected District Attorney, he served in the Shawnee County DA’s Office as an Assistant DA where he prosecuted cases involving a wide range of offenses, including juvenile and CINC cases, child exploitation and abuse, drug distribution, property offenses, violent offenses, sex offenses, and homicides. As the District Attorney, Kagay targets prosecution of violent crimes, sex crimes, and crimes against children. He is committed to community outreach and partnerships. Kagay is a member of various law enforcement focused boards and organizations.

Mike completed his undergraduate studies in English from Washburn University in 2005, and his Juris Doctorate degree from the Washburn University School of Law. Mike entered law school with the goal of becoming a prosecutor in Shawnee County, and was able to realize that dream. Mike is grateful for the opportunity to pursue his passion of protecting the innocent, being a voice for victims, and seeking justice.

Mike is committed to running an efficient and professional office focused on protecting the citizens and families in our community. Mike lives in Topeka with his wife Hannah and their children. The Kagay family is proud to call Shawnee County home.