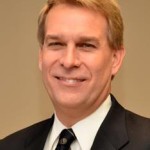 Scott Smathers joined the GO Topeka team as Vice President of
Economic Development in October 2013, after serving as the Vice President of the Denison Development Alliance and the Denison Industrial Foundation in Denison, Texas, for the last 10 years. Prior to his time in Denison Scott spent nineteen years at a retail analysis and consulting company in Tulsa, Oklahoma, where he worked with various industries around the world.

Scott received a Bachelor of Science degree from Texas A&M University in 1984 and an MBA from Oklahoma City University in 2000. He also graduated from the Economic Development Institute in 2006 and received his CEcD certification in 2007.

Scott has been married to wife Christina for 25 years and has one son.

This entry was posted in Blue_Bar. Bookmark the permalink.